We rented a golf cart for the week for going out to eat in the evenings since the roads are not all well-lighted on the way.  We also walked into town a couple of times during the day (approx. 1.5 miles each way).  The most fun was taking a long bike ride one day, but since Grand Caribe didn't have any bikes that fit me, we only did this once as I had to borrow one of the staff member's bikes.  Barry also got out for a nice paddle in one of Grand Caribe's kayaks when I was feeling under the weather with my first cold in four years (bummer). 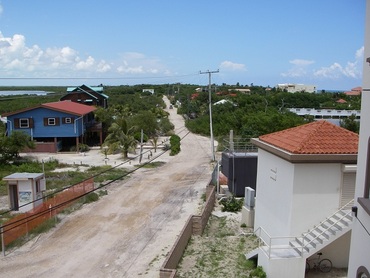 As with our first trip to Belize, we had some incredibly enjoyable and delicious meals on this trip, eating outdoors whenever possible.  We revisited several of our favorite San Pedro restaurants from our first trip, including Red Ginger, Blue Water Grill, Caliente's, Wild Mangos, AkBol cafe, and Estelle's for breakfast; plus added some new favorites, including Sunset Grill, Wild Crocs, and the Palapa Bar.

We enjoyed spending time with Bernie and Doris and appreciated all the helpful advice they gave us.  They have been invaluable mentors in this endeavor, and we would not have attempted it without their guidance.  They can also keep an eye on the construction progress for us and send photos since they are in Belize full-time.
We also reconnected with a few of the locals we'd met on our first trip.  We visited with Joe at Joe's Bike Shop in town, where we'd rented bikes several times on our first trip; Bernadette, the lovely waitress at AkBol cafe; Efrain (apologies as I don't know how to spell his name), who was on the Phoenix staff in May but us now at Grand Caribe and kindly lent me his bike to ride; and Rafael, one of the security staff at the Phoenix.  We also made new friends Linda Carter, a regular customer at the Palapa Bar; Joe and Carlos, staff at the Palapa Bar; Helen, bartender at Grand Caribe pool bar; Phillip, waiter at AkBol; Walter, security guard at Grand Caribe, and all rest of the helpful and friendly staff at Grand Caribe.  Belize is full of great folks!

Fun in the pool.

We tried to spend an hour our so in the balmy pool at Grand Caribe every day, often enjoying a tropical libation in the swim-up bar.

Much to our dismay, Hurricane Earl started gaining strength and heading for North Carolina while we were on this trip to Belize.  I had set my cell phone up to make international calls, or so I thought, but it was not working, so we were limited to emails to try to get some additional hurricane preparations done on Logos, our sailboat kept near Oriental, NC.  As luck would have it, our boat is currently under contract, so we were able to email our broker to ask him to call the dockmaster at our marina to remove our inflatable dinghy from the davits and perform some additional prep.  All this was done in the nick of time, and our undying gratitude is owed to Keirn and Keith for their generous assistance.  As it turned out, Earl weakened and did not cause any issues at all in Oriental (30 mph winds and half an inch of rain, if that), but we were able to sleep easy the night the hurricane hit after much worry early in the week.

On the return trip, our Tropic Air "puddle jumper" flight diverted to the tiny Caye Caulker air strip to pick up an additional passenger.  This was the first time we'd flown into that island.  I wasn't too thrilled about yet another landing and takeoff, especially on such a short runway, but it all turned out fine.  Later, during the wait to take off from the Belize International Airport, the pilot invited a few "aviation enthusiasts" into the cockpit to meet the flight crew and see the controls.  Although I've never thought of Barry as being interested in aviation, he does like electronics, so off he went.  He found it fascinating.  I don't even know if cockpit visits are allowed in the US since 9/11, so this was a neat and unexpected experience. 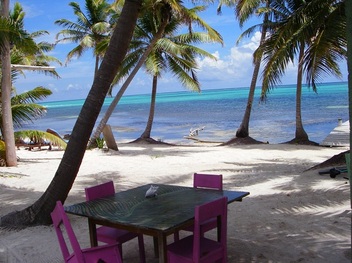 This photo taken at AkBol (a short walk from Chico Caribe) just says "Caribbean" to me... We will be eagerly anticipating our next trip to this beautiful paradise.